B. Markus Stauss’ musical Concepts
Markus Stauss commented the basis of his musical writing and playing, as well the conceptuality of his playing concepts on May 13, 1997 in a discussion with this author (The recording and Stauss’ explicative graphs are kept in the archive).

I. The parameters of his music he organises as follows:

In this graph the horizontals and the verticals are to be understood as a two-shell spheres or concentric rings with their axes in different angles, able to rotate independently, being in movement or fixed. Stauss calls this model the “time and (re)production sphere”.

II. The constituting three colons of his music are:

B) textures / patterns / stratum overlays (stratifications). They occur during:

C) Energies in different states of matter, changes of these states, the emergence of new energies just because of these changes 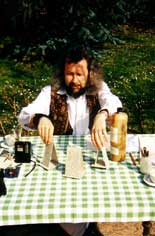 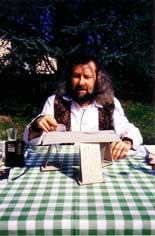 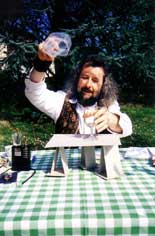 V. What are the consequences?
(citation) My interest in positions, alterations, changes and new light make questions about and attributions to style irrelevant. The often used expression “stylistic crossover” relates to positions who explicitly belong to a style, the change in position is perceived as a change in style; stylistic featuring is happening in the listeners head, they are listening habitudes.

The topic is to be illuminated in relation to colour + energy + patterns. It’s not only to be used as a fix point or for recognition.

Process and structure of playing and writing are researched and questioned permanently. An example:

Are precise tempi equal to groove ?
On what does improvisation orient itself ?

“Anything goes” is not possible.