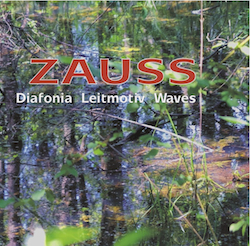 Zauss – the experimental project consisting of guitarist Francesco Zago and saxophonist Markus Stauss – is back to PR&PM! In 2005, Stauss (who was known around the Swiss Jazz and Rock scenes for playing in “Überfall” and “Spaltklang“) began a partnership with Zago, resulting in the different parallel projects “Neolithicum Duo” (2005), “Yugen” (2005), and “Kurai” (2008). … By means of free improvisation, the duo promotes the total deconstruction of the regular musical structures in time and space, resulting in a kind of anti-music that creates dreamy to concrete audio-visual impressions that may either disturb, or calm down, the listener. “Diafonia Leitmotiv Waves” features 11 tracks. Beyond the experimentation and avant-garde attitude present on tracks such as the weird “Introitus” (2:37); the noisy “Nordwind” ; the squeaking and cartoonish “Wie Kinder” ; and the chaotic “Es Fuegt Sich” (4:56) (which combines statics, interference, hysterical sax, and guitars that have a strange “deep-sink” sound), Zauss finds some interesting musical results on tracks like “Diafonia” , which has a vivid song-structure that arises by the confrontation between Zago’s syncopated guitar and the elephantine sax of Stauss; and “Crescendo con Fuoco” , an initially mourning piece that goes gradually hectic, with the coming of the rhythmic guitar that emulates the sound of bass and drums, and of the frenetic sax. The main pieces of the album are “Adagio Molto” and “Prima dell’Alba” , both of which reflect the state of introspectiveness experimented by the two musicians when they are concentrated on their improvisional sessions. “Adagio …”, although slow, is poignant and sensitive, driven by a delicate sax tune, which is reinforced on its subtleness by the cosmic-sounding guitars; while “Prima …” offers a beautiful melody that arises from the sax to be superposed to a soft and nostalgic guitar plucking. Speaking of emotions in their purest state, the following tracks are really good on impressing the listener with deep feelings: “Senza Troppa Eleganza” transmits a feeling of misplacement; “Lamento” is slow and melancholic, but on its lengthy duration one can realize a kind of chamber-music symphonic structure, as Stauss goes on extracting violin-like sounds from his tenor sax; and finally, “Gran Noturno” is hypnotic, unreal, slumbering, and frightening, recalling a piece of the band “Art Zoyd”. After listening to “Diafonia Leitmotiv Waves”, I can tell for sure that Zauss stays firmly compromised with the aim of making unconventional music, and is determined to contradict and destroy all musical dogmas.

markus-stauss.ch is ONLINE
Scroll to top