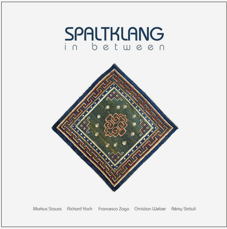 In the meanwhile Spaltklang’s 5th CD is released. There are some reviews already. Below you find a very interesting one in full lenght:

Spaltklang is one of the rare newish bands which hit me and hit me hard. I was at the AltrOck festival and I had heard many of the bands who played there. Spaltklang was one of the few whose name had eluded me, but they were a true highlight of the festival and I never lost sight of them again. They have become a real favourite. Their previous album came out in 2009, so we had to wait 4 excruciating years for the latest release, In Between.

A lot has happened since En Suite. The Spaltklang line-up is completely different, with only the main man Markus Stauss (of course) and drummer Rémy Sträuli remaining from the previous line-up. Whatever the reason for the changes, there was one thing I was relatively sure of – whatever Markus Stauss would release, there was a fairly good chance I was going to like it.

The last statement probably compromises any hope of objectivity I would like to bestow upon the readers, but I did try and tackle the album and review as objectively as possible. Still, as far as I’m concerned, music cannot be tackled objectivity because it is for me a much more emotional matter than intellectual and emotions differ from listener to listener.

Declaring myself a fan of Stauss’s works, I still don’t adore everything he has done. I have often said I’m not a big fan of free jazz and Stauss’s roots are firmly entrenched in jazz. This hasn’t changed on In Between. If anything, he has dug himself deeper in the world of jazz. With the addition of Zago on guitar, there is perhaps a bit more jazz rock than ever before. That being said, there seems to be more improvisation than on the previous albums, which go from slow build-ups to eruptions of jazz rock mayhem, some more successful than others (the percentage is pretty good though).

Just like you cannot mistake a Dali painting, there’s hardly any mistaking a Stauss composition, with his typical saxophone playfulness. It seems hardly fair with what ease Stauss blows out one majestic melody after another, laying the foundation for the entire album, with the rest of the guys picking up the pieces. I still feel this is his biggest strength. I mean, the improvisation is well executed, but the composed parts are where the magic lies, even if they are just an outline for the whole story.

Perhaps too jazzy in some segments, but utterly perfect in others, Spaltklang deliver yet another memorable album with In Between. The album also marks a new chapter in their history. Let’s hope the book has quite a few more pages to go. Things are just getting interesting. (Rok Podgrajšek, www.therocktologist.com)