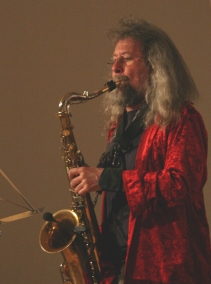 Markus Stauss was born on September 10, 1954 in Basle where he passes all steps to social incorporation from kindergarten (in Riehen) up to his Bachelor degree and the first semester at the Basle University, where he is taking history courses. He enrols in his obligatory military service at the French speaking Swiss-French border town Vallorbe in the Swiss Jura mountains. Follows his primary teacher diploma in Basle; he teaches there until July 2015 as an advanced level part time teacher, teaching music, math, drawing and some natural science.

He begins his own musical education in 1972, taking flute lessons with G. Marini (until 1975). Later he enrols in a music teaching education program for primary school level (1974-1976). The same year he takes up saxophone courses with R. Fisch, in 1977 changing to Ch. Bader, where in addition to the saxophone lessons he picks up the basics in theory of music. In 1991 he turns to Franziska Heiniger for recorder lessons in Medieval and Renaissance music. In a self taught manner he conducts studies in the development of Hard Rock, Free Jazz and Jazz Rock, as well as in that of medieval music.

At that time he starts his own and quite diversified music teaching activity as classroom teacher for music, is involved in developing teaching curricula for the midlevel student classes and also in continued education for music teachers, but also a saxophone teacher at Hug, Basle and in private. He is approaching his public also by sharing his historic and theoretical knowledge, lecturing about Hard Rock, Jazz Rock and Free Jazz. This very pronounced activity in learning and teaching is a sideline though to the development of the saxophonist Markus Stauss and to that of the band leader Stauss who is founding (sometimes joining existing) Free Funk, Jazz, Folk, Blues, Rock and Jazz Rock formations and groups, but also to that of the flutist and chamber musician Markus Stauss.

After “Witchcraft” he founds the “Trio Infernal” together with Jacques Widmer, the group with which he makes his first recording “Zwischenspiel” (Interlude). This record is taken note of by the most important Swiss Jazz commentator of the time, Jürg Solothurnmann who gives it a splendid review in his very prominent weekly Jazz talk show on the national radio DRS. Already earlier Stauss had caught the ears from several concert organisers: In 1983 he is on stage at the famous “Willisau Jazz Festival” with the “Trio Infernal”, but also with the “City-6-tett”. The year after he is invited to perform at the “Jazzdays Biel”; that same year he receives a commission from Belluard-Bollwerk International Fribourg for a BBI production in the context of the its “big band summit” – for this purpose he founded the “Gezeiten Orchestra” (tides orchestra). Already 1983 with the City-6-tett, he celebrated the 1992 10th anniversary of this extremely groovy Basle band, whose second “city-6-tett” cassette will always be considered a pearl of the Swiss Jazz sound documents.

Until 1985 he is active member of the “Musikwerkstatt Basel” (Basle music workshop), under whose label “Xopf-Records” he later will be publishing 1 LP and 4 CDs. This series documents his collaboration since 1988 with the American Free Funk and Noise scene. Dimthingshine (dr), David Moss (dr, voc) and John King (g) from the American end, Dieter Ulrich (dr), Joseph Poffet (s) and Remy Sträuli (dr) from the Swiss End are often partners in this collaboration, while Jean Chaine (b) from Vermont/U.S.A. is the steady partner. This collaboration under the group heading “ulterior lux” culminates in 1996 in the production of the CD “evergreen”. In April 1997 another “Ulterior Lux” recording is published.
All together five records (LPs and CDs) document the long musical research he engaged with his rock group “Überfall” (“Hold-up”), founded together with Pit Kayser. These historic data demonstrate Stauss’ interest in continuity; he works with his groups over long years and develops music with them as long as he can still perceive new musical ground on the horizons. “Adventurers like / with somnambulatory certainty / penetrating massive thicket / digging hidden treasures / extracting fascinating preciousness” was the working maxim for 1997.

As the adventure Music becomes more and more exiting and challenging, Stauss retracts more and more from live performance and stage appearance in order to invest his energy in the own music making and composing, as opposed to spend it looking around for organisers and places, where doing gigs and going on stage still is possible. As off 1992 he is most interested in saxophone / bass / drums formations, its for them he writes music, “develops playing concepts”. Stauss rarely communicates in writing or vocally; if ever, it is short, with shreds and scraps, mainly in the titles of his compositions and his added commenting line(s): “so froh”, für Alle die, die uns sagen wollen, wo’s lang geht” / “so nice” for all those who want to tell us, what’s on”. It’s in the events he talks about and through the stories he tells, where one can sense his professional and moral yardsticks and reference points – a professional with high demands on the musicians craftsmanship, on his own creativity and that of others; he’s a man with a clear perception of (also political) ethics: he refused a gig for SANDOZ, when the near GAU pollution event happened at their site Schweizerhalle.

Stauss in private is more of a restrained person, very clear in his convictions, utterly himself, a musician of “ecstatic power”, though unexpectedly a profound conceptual and theoretic. He is a nervous traveller, has no car and never saw an aircraft from the inside – he probably will never ever, nor is he currying favours to make himself understood – some nevertheless catch the message, seem to understand and are able to verbalise, what (probably) makes the guy tick (see also “Others on Markus Stauss and his music”).

Appendix: Markus Stauss did play with these musicians.

Since Nov. 2009 up dates by Markus Stauss