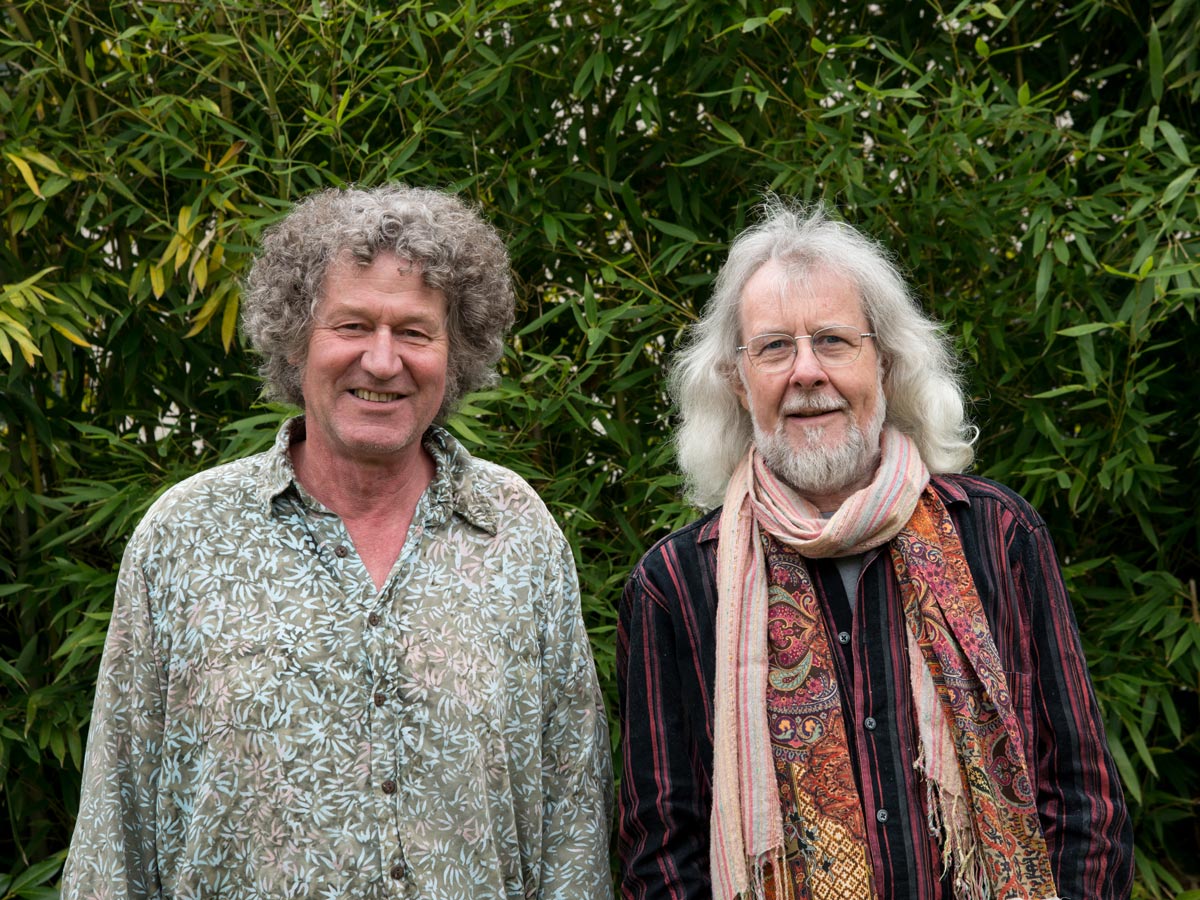 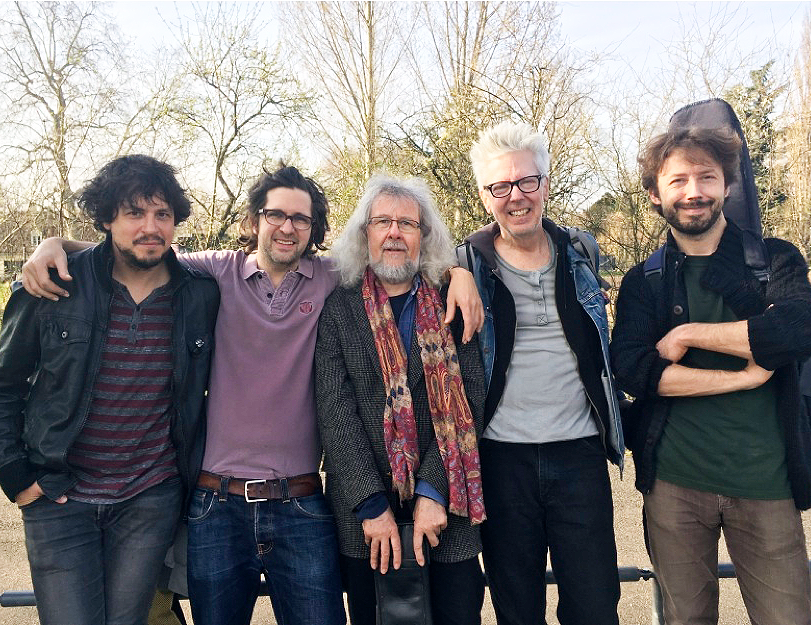 Unexpectedly the trio VOGEL (bird) STAUSS & his ARTGENOSSEN (companions) appears as the quintet MARKUS STAUSS ARTGENOSSEN / COMPANIONS. New are Damien Campion from TRANK ZAPPA GRAPPA IN VARESE? (TZGIV 2006-2012) and John King, with whom I often played from 1988-1993. Through him I met Jean Chaine, with whom I recorded 3 ULTERIOR LUX CDs/LP and an ÜBERFALL LP. Speaking of ÜBERFALL: Thanks to the LP „Neuschnee“, the contact with John came about. So from ÜBERFALL to ULTERIOR LUX to TZGIV to BIRD STAUSS to STAUSS ARTGENOSSEN / COMPANIONS. And the music we play?

„It’s a fine mixture of powerful jazz patterns, experimental excursions, and some firm guitar lines … an excellent album. It will take you on a fine journey.“ „I feel that this album should really please fans Van Der Graaf Generator … early King Crimson flavours (with Mel Collins in the band) also pop up at times. As usual the music is excellently performed and recorded … Great stuff!! Treasures of Light comes highly recommended indeed.“ … I read in the first reviews for the double CD „Treasures of Light“. 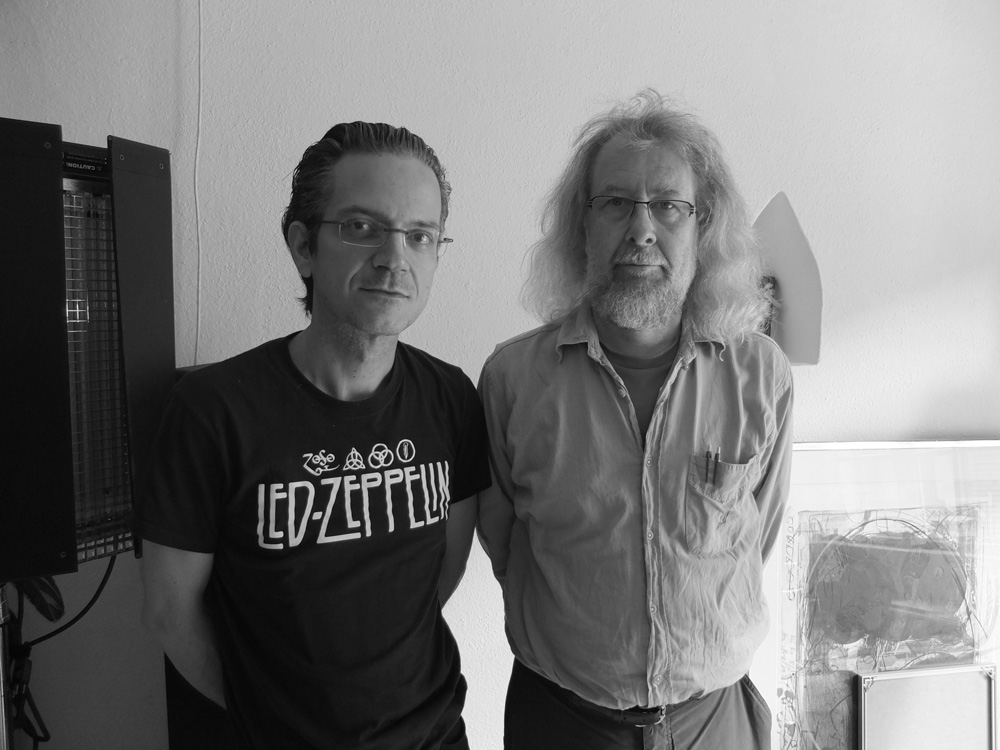 Tradate (VA, Italy), Juli 28, 2006: Francesco Zago and Markus Stauss improvised free with el. guitar, loops and soprano sax. They played two tunes from theirs NEOLITHICUM DUO set as well, this time with the soprano saxophone instead of the bass saxophone. The whole session got recorded with a stereo microphone and a 2 track 24 bit flash recorder. Francesco & Markus decided to release a CD with all the improvisations plus 2 of the compositions under the new name ZAUSS. Benno Hofer of Ton-Art Basel made the mastering work. The release of the CD „neulich neben der Grenze“ was on November 14, 2006. Since this CD Stauss playes aside the soprano sax other saxes as well plus devices.

During 2010 Zauss decided to enter a real studio to record for another CD. The November session in 2010 at Ton-Art Basel got released June 1, 2011 as “überall in terra straniera borders beyond”.

Juli 28, 2013: a sponteaneous session took place in Tradate (VA), Italy, that got recorded in a sponteaneous manner as well. The recordings, with a little fresh-up by Benno Hofer, got released on CD as „Diafonia Leitmotiv Waves“ with insightfull liner notes by Claudio Bonomi, on September 15, 2014. 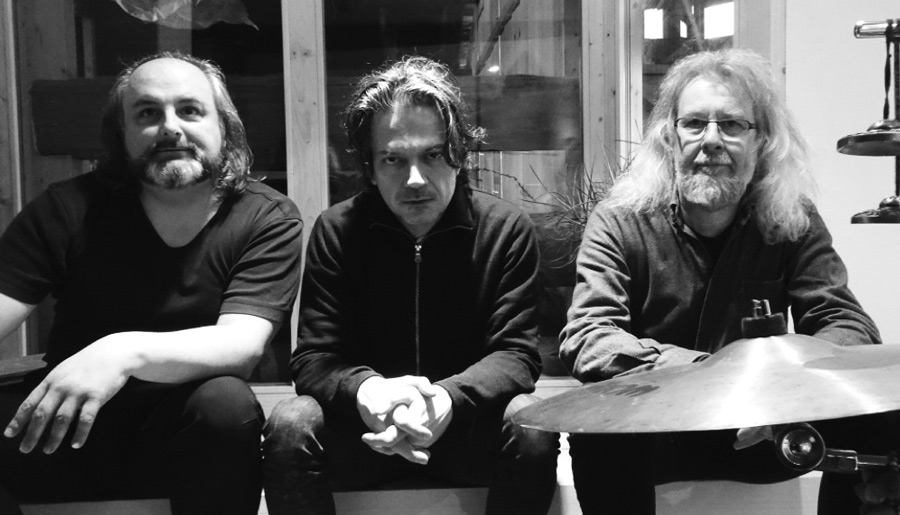 Benno Hofer invites Zauss Trio, feat. Giuseppe Olivini on percussion and teremin to record in Alvaneu (GR/CH) on am Februar 8 & 9, 2016. Many improvisations got recorded, from which 16 pieces got selected, mixed at Studio Nadelberg and released as double CD „trittico immer all over“ in March 2017. 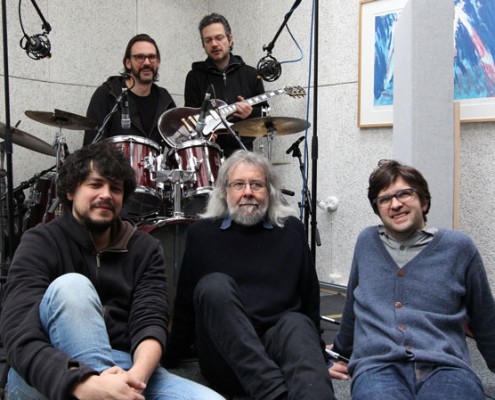 It was born 2001 when I had the idea to create what in medieval times was called a “broken consort” (the in German word for split sound is SPALTKLANG) – a band composed of wind and pluck instruments and strings including a percussion unit with todays instruments: sax instead of recorder, viola instead of fiddle or viola da gamba, electric bass instead of lute and drum set instead of medieval percussioninstruments. This ensemble is to play music, which, although performed by ÜBERFALL, ULTRIOR LUX and „Stauss-Anliker-Kayser-Vogt“ in concerts, got released on CD as a low-budget trio version only, or even never got recorded.

Already the first sessions kicked off my interest to unfold the “SPALTKLANG” at its best: to incorporate new musical material into the compositions, to alter arrangements and improvisation concepts was the beginning. During the following years I wrote increasingly new compositions written just for this SPALTKLANG quartett. The 4 released CD albums „Alpenglühen“ fm 0818, „Surprise“ fm 0821, „Lontano“ fm 0822 und „en Suite“ fm 0826 with the line up Stauss – Vogt – Brunner – Sträuli document this development.

2010: Talking about a new line-up, many discussions and sessions, a lot of thinking into different directions and tons of material for new compositions leads to this idea:

2011 Spaltklang with an enlarged line-up: a 6 piece outfit (viola or violin, sax, trumpet, el. guitar, double bass, drums). Unfortunatly the size of the group, the musicians’ very different availabilities and therefore very individual schedules, made it impossible to continue the rehearsals on a regular basis.

In summer 2012 I had to take a time out and the band was put on hold.
December 2012: I re-arranges the sextet tunes for a quintet. This lineup now is an international (CH, D, I) project group that will elaborate the set for concerts and CD recordings in a few days following.
September 2013: The CD „in between“ got released on the italian label ALTROCK. 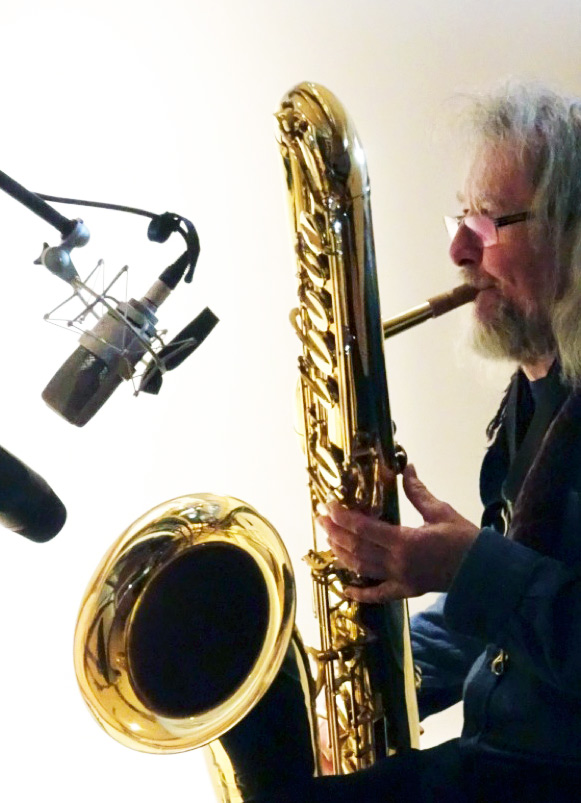 Climb from the depths of the abyss to where birds float, linger and glide back to earth, grooving with full sound.
In this paradise, the electronic extras blend and accompany from anywhere to somewhere, pulsing, roaring, creeping.
Contrasts and surprises, pervading, ecstatic, meditative, insisting.

BUT NOW these „Neolithic“ extras found their way into disposal and they only live on in the memory BUT ALSO on the CD MARKUS STAUSS „Neolithicum“ available in the Online Shop.

And the BASS-SAX will really rise SOLO from the depths of the abyss to where birds float, linger and glide back to earth, grooving with full sound. An also contrasts and surprises will not be missing. 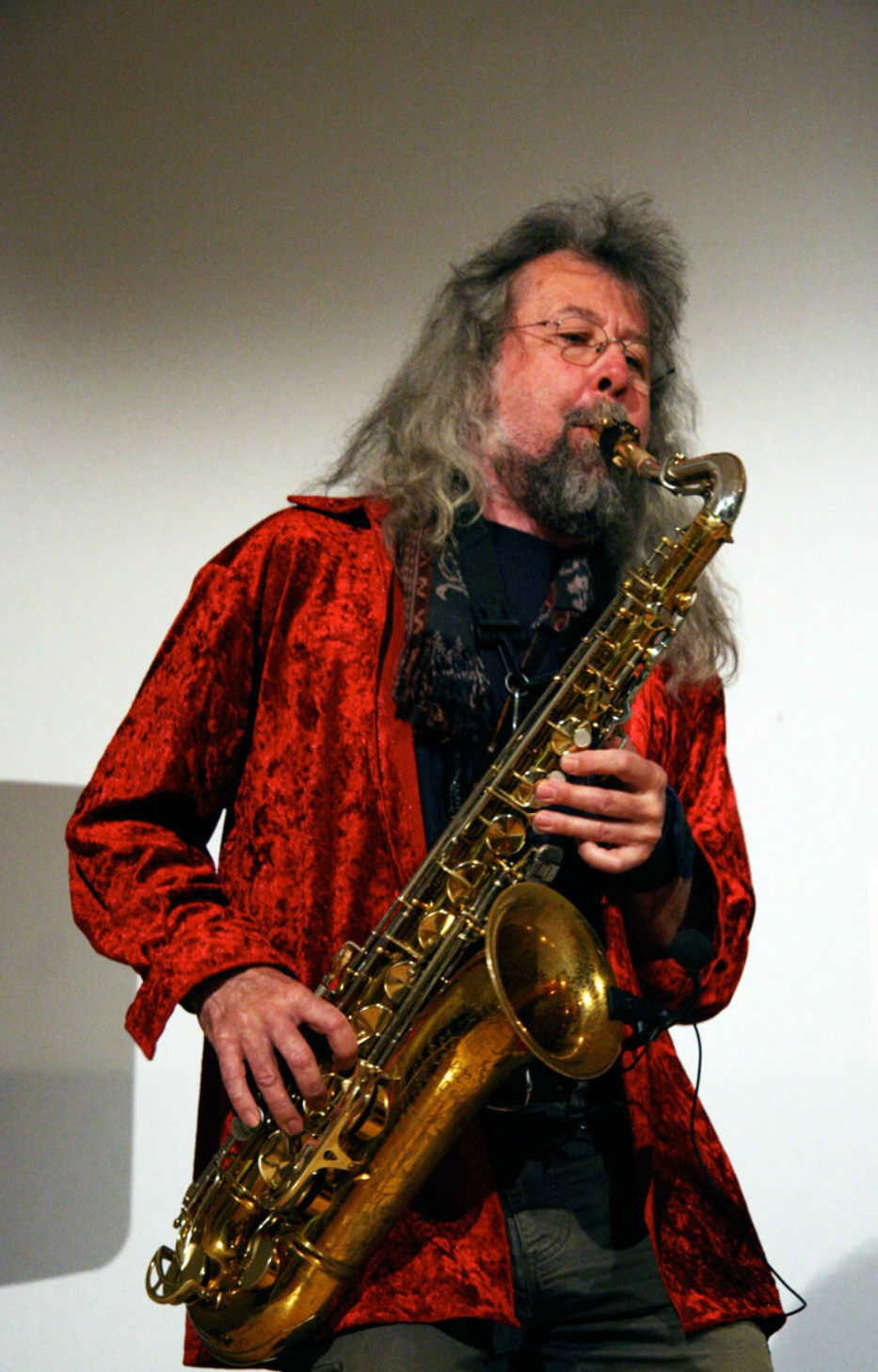 Again and again I have touched on wild, massive open, risky, curious or simply crazy projects or created these on requests from festivals. Some of these projects have become permanent groups and have presented their music at concerts and/or on LPs/CDs. Other projects have performed live a few times only and occasionally been recorded.
All projects have the peculiarity that the participating musicians represent a wide variety of musical orientations and musical attitudes.

A selection:
1985 – 1988: GeZeitenOrchester, 4 existing bands meet in the grid of a suite, which is controlled by dynamics, density, tempo and some melodic themes.

1993 / 1997: Compositions and improvisation concepts for XOPF POOL INTERNATIONAL: 5 bands and soloists are merged to form a large orchestra, within each formation / soloist takes on familiar guiding practices and musically deals with each other’s playing attitudes / inputs. Cassette XOPH Records Nr 20.

Since 2006 Damien Campion plays bass. We play music from STAUSS-CHAINE-LINDENMAIER, ULTERIOR LUX, ECHOES and new compositions. A demo CD with live recordings (Cryptic Echoes Live in Belgium) will be released at the end of 2006.